Share strategies and technology best practices are paramount for people working in the IT industry; after all we all work indeed within a communication networks, right? So it makes perfect sense for us humans to communicate and share thoughts and experiences, just as we are asking computers and systems to communicate to one another and share services and resources

Before diving into the best practices that you should follow if you are responsible and/or involve with IT systems, let's go and first have a laugh! Allow me to describe on this article the most popular jokes that I've encountered in my IT career spanning over 20 years. I have been working in the IT industry officially from 14th August 2000, Monday, when I started my first job as an IT Technician after working for a year as an IT Electrician. You see, I wanted to work with transistors, circuits, motherboards and capacitors, but then came around Pascal and I fell in love with software too!

How do you troubleshoot an IT problem? What are the technology best practices that you should follow, if any? What do you do when your boss, customers or colleagues are on your back, the phone is ringing pure hot and all users are complaining that the system is down? I'm not going to say for you to keep calm because you should already be. If you lose your temper whenever you are confront with an IT issue (serious issue), but better find another job field less stressful

But what I am going to say to you is that you better be prepare for these types of events. They will happen, sooner or later a hard drive will fail, a switch will go bust and a VM will crash, inevitably. It's the Second Law of Thermodynamics in action: all breaks eventually. So you better get the protocols ready in advance

These are the things I recommend to prepare for this failure events:

Memorable jokes while working in the IT industry

Here are some of the real events that have happened to me at work. Each one of them had made me laugh for at least one hour or more! hahaha

For many years I worked as an IT Manager in a Secondary High school in North London. Once, a lovely student, with glasses, of Nigerian origins and of about 11 or 12 years old (he was doing year 7) very softly knocked my door in the middle of lesson time.  With a sheepish voice, half way between the permission and the fear of suddenly being told off for reasons that only adults understand, the student told me:

- Sir, my computer is running out of battery

I was struck on my mind...what? This student is working next door, in an IT suite room full of computers that are all connected to the mains

-Running out of battery? - I asked, full of incredulity

-Yes, sir - the student replied after bumbling of a couple of seconds

But here it comes his determination. He re-arranged his posture, showing me reassurance of his affirmation, and an undoubtedly sign of pride in the next sentence that follows:

- I have saved my work, though - he concluded

-Show me, show me, please - I told the student as I indicated the way to the door

As we walked into the IT suite, the student led me to his position, where he pointed with that finger of you-are-quilty-and-we-know-it to the constant LED hard drive red-light that his RM workstation was displaying. OMG! a red light! just like the one that is on the laptops that were used in the school when their battery is running out, haha. That's why the computer is 'running out of battery'.... 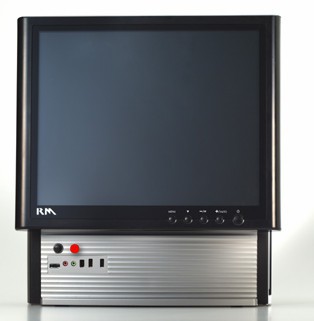 Of course the student is not to blame for his nativity, but the teacher? The student first reported the "problem" to the teacher, and then she just send him to see me, to seek IT support for his daunting "issue".  Didn't she know the difference between a laptop and a computer? Good chap, he had already saved his work!

A teacher came to our office with her laptop broken. She has told us the day before that she was gonna bring it, and we were prepare for it. She was one of those teacher that have not been brought up on the "digital" generation, and pretty much was lost when taken out of the Word or PowerPoint comfort zone. Anyway, she brought her laptop to us, and as she was passing the old HP machine machine to me, she said:

- Be careful, the laptop is heavy. It is full of documents and pictures

I could not help it, and smiled at her comment, and explained her why. But... that got me thinking.... could she be right? Could an arrangement of 1s and 0s actually weight more than an arrangement of just 0s? or just 1s? Let's say I present you with these two columns, of exactly the same space. In one columns there is only zeros, and the other there is combination of zeros and ones.

From the column on the left we can produce nothing, it is fair to say that it has no meaning to us, it is just emptiness, occupying a space but with no information to deliver, no data whatsoever, or at least only the data that is zero. Just like a black hole: the only information contained is zero, which by itself is informational. The column of the right, however, is a totally different story. That arrangement of 1s and 0s actually mean: "This is a piece of information". The answer seems to be that the column with information actually weights less than when there is no information, this is because the 0s contain charge (and therefore an infinitesimal amount of weight) while the 1s position discharge the transistors. Go and figure! She actually should have said the opposite and she would have been spot on

One Monday morning I was on my office, extremely busy doing what IT do best, watching you tube videos, when I received a phone call from the PA of the school. Urgent... code red! When she calls is because something very serious has happened. I answered the call and was shocked to her the following:

- Please help. I only have 3 milimiters left of space on my computer. I'm afraid I'll not be able to save work, can you give me more space, please?

Let me re-phrase that? 3 milimeters left of space? What does she means by that? She chat a bit over the phone, and I could not figure out where do metric of her has come from, so decided to pay her a visit. I arrived to the PA office, knocked the door and there she was behind the big desk, with a ruler over the monitor, measuring the H:\ drive (personal network area) where we had setup quotas. She had it on read, but still with 5GB out of the 50GB left. Yet, windows had coloured her icon in red, and she measured the 3 milimetres she had left of space, haahahha It never occurred to be to think like that, that is for sure out-of-the-box thinking :)

Don't forget to run Windows Upgrade on your computer, haha, be grateful when you run "upgrates" :)

Literally, this is the ticket one of our users logged in the support system:

Since I joined I haven't been able to shit down at the end of each day due to needing an administrators password to do so.

The cache is now getting quite full and slowing it down.Can you help please?

Everybody laughed their socks out, hahaha, the user mistakenly typed "i" instead of "u" for the word "shut", it just happens that they are both next to one another in the keyboards! hahah

It seems uneconomical, inflexible and not very modern to have a rule about amazon purchases only being made on a Thursday!