Our brains, the biggest mystery

Section 1, our star the Sun, without it nothing will be possible

Section 2, the perfect position of planet Earth in the Universe, and the chain of random accidents that caused your existence

Section 3, the abstract of your thoughts and the illusion of control

4. Our brains, the biggest mystery

The second law of thermodynamics states that all energy dissipate and that, following the unstoppable arrow of time, everything converts into chaos, into disorder, intro entropy. You leave alone a boat on a beach and, given enough time and without any energy input to repair it, the irreversible process of entropy will start and the boat will rust, fall apart and eventually convert into the sand of materials and compounds which were use for its creation. This second law of thermodynamics has always been fascinating to me: it creates the concept of entropy and, if you think carefully, it defines the very principle of Death. Yes, this is the law that identifies Death from the scientific point of view: everything falls apart if you give it enough time, everything dies, everything will die, you, me, the sun and even the Universe as a whole will inevitable perished too. If that is the case, if the second law of thermodynamics defines Death...then, which is the law that defines Life, you may ask? That would be the first law of thermodynamics, right? It seems logical. The first law of thermodynamics states that energy cannot be created or destroyed, it can only be transformed. This maps with the principle of reincarnation, by which consciousness never dies and is purely transferred from living entity into living entity. Does this silly analogy means that Life has always existed? Anyway, my point of starting this article about our brains, the biggest mystery like this, boasting about the second law of thermodynamics, is that in theory its principle should not have allowed for the creation of the human brain. If this law states that everything falls apart with time, how is that possible that, precisely because of time, the Universe has allowed the creation of the brain? In theory this organ should not even exist, and yet each one of us posses to a certain degree the most complex structure of the Universe known man: the human brain

It turns out that the existence of the human cerebral cortex does NOT violate the second law of thermodynamics, because it exists in a "closed system", meaning that it needs constant input of energy from the exterior in order to survive, preserve its structure and prevent its disappearance into the realms of the nothingness. This continuous input of energy means that we are constantly creating entropy around us in order for the anatomy of the brain to exist, in other words, we need to decompose the ordered structure of a tomato (digest it) in order for its glucose to be absorbed and support the internal molecules assemblies of our brain. There is something there, intrinsically metaphysics, in this order-to-disorder process that have created our brains, something strange and mysterious that I am not entirely sure how to describe it or what it is but that attracts me a lot, it is like our brains are black holes of order that create disorder around them as they evolve

Metaphysical thoughts apart, let's dive now a bit into Neuroanatomy of the brain, and let's find out what are the most important parts of its complex structure....essentially, ALL of the brain is important. The human brain is made of such intricate connections that many books have been written since it was first explored anatomically speaking in 1909 by German neurologist Korbinian Brodmann, who mapped the brain's cerebral cortex into 52 separated parts (the so-called 52 Brodmann areas) based on regional variations structures of the cells; later on, each one of these areas have been associated to different cortical functions, like this general map shows: 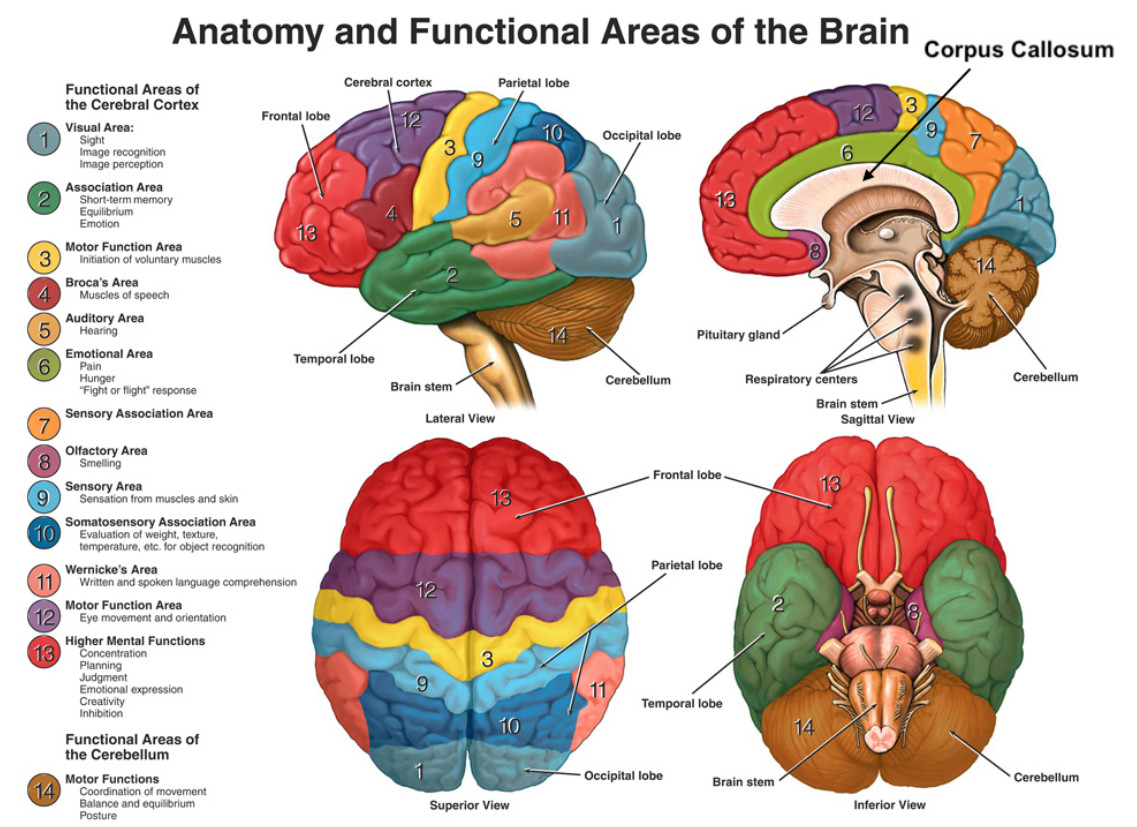 Considering the above....each area of the brain is dedicated to a specific function. In spite of the complex connections of the brain, it has been proven again and again by neurologists that, if you damage one specific area of the brain, the neurological functions associated to that area are indeed affected, so basically we are nothing but parts of the brain attached together which, by random connections, make each person unique. On which part of our brain the consciousness resides? Neurology know that the hippocampus is the part of the brain where our memories are stored, but where, for example, is our soul? or our spirit? or our dreams for that matter? Rene Descartes, the famous French philosopher, published as far back as 1649, a book (The passions of the Soul) in which he believed the human soul resides in the pineal gland, could that be true? Certainly, our consciousness must resides somewhere on our body, and if all of our body will perish somebody, does our consciousness perish too? Is our consciousness, soul, spirit or whatever we want to call it, made of a material other than our flesh, able to survive our body? Are our brains, the biggest mystery, the final place where the spark of what we are dies, whenever it is that the brain also die? 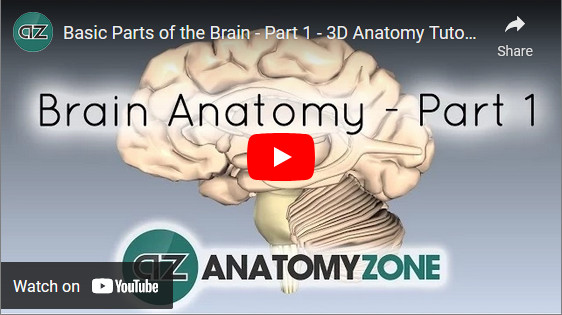 Commonly we believe the brain is composed of "grey matter" (cerebral hemispheres), but in reality its structure contains way more interesting goodies other than the obscurity of that grey matter, with lots of small organs called "nuclei", collection of nervous cells deep within our brain which fulfil specific purposes. In total we have around 18 nuclei, here are some of the brain's components and its peculiarities, most of them located in the Brain Stem:

Cerebellum; meaning "little brain" in Latin, it is positioned as the lower back of the head and is responsible of controlling our movement, positions, coordination, motor control

Diencephalon; is part of the middle brain, located right in the center of your head, and among trillion of never connections it contains the following nuclei:

1) Thalamus; the thalamus is composed of two sections called 'thalami' that are joint together by the inter-thalamic adhesion, this bit is critically important (like all the rest) because it links the communication between the cortex, upper brain, and the medulla, and in a way is like the thalamus is the inter-link between the abstraction of us and the solid reality of the Universe we live in. For neurologists, the thalamus functions as a relay, gateway or switchboard station, like a coordination center to pass information up and down...but does it alter this information as it pass it along? Call me a poet, but is the thalamus the place where we really exist? and the pineal gland the place where our soul, that divine spark that only thought million and trillion of years of meditation we can reach, also exist, unreachable to us until we get to a stage of 'enlightenment'?

2) Hypothalamus; located just below the thalamus

3) Pineal Gland; located at the back of the head, underneath the thalamus and just in front of the cerebellum so it is really well protected

Hippocampus; we actually have two hippocampi, one below each side of the brain, below the parental lobe; they are responsible for learning and memory, it also regulates mood and emotions. Neurogenesis, the process of creating new brain cells, start when we are embryos and gradually slows down as we age, though in the hippocampus (and probably the amygdala too) scientistic have proven that neurogenesis still occurs even when we are adults, given the right conditions of diet, exercise, genes, etc

Neocortex; it has six layers of neurons stack on top of one another to form that we commonly know as 'grey matter', the ultimate example of evolution that allows for abstract thoughts, complex behaviours as a result and the dominance of a less-muscular species such as the Homo sapiens over all other species of the planet...just six layers of neurons piled up one on top of another

can be created in the hippocampus, and there studies linked when a stop of neurogenesis in the brain (maybe due to drugs, stress, lack of sleep, etc) can be linked to depression

that it is impossible to dive in detail about what each part of the brain does in this article.

The Frontal lobe of the brain in separated from the Pariental lobel by the Central sulcus,

Hormones are release into the blood 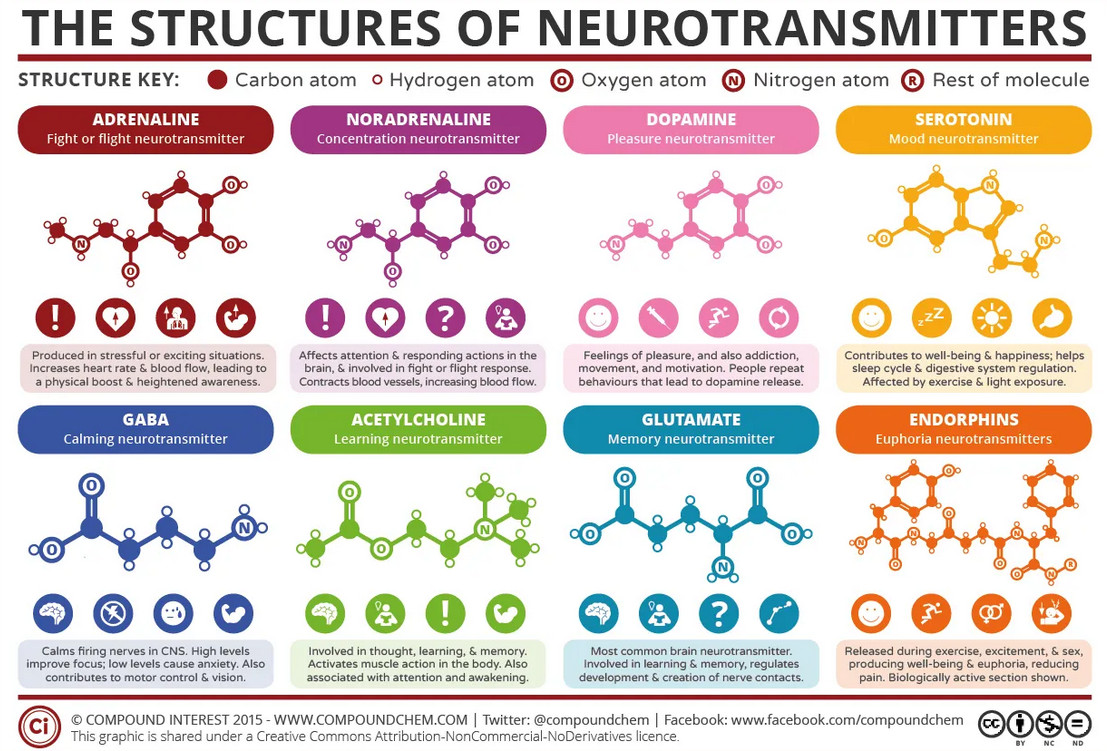 , as entropy increases, that everything falls apart and complex structures eventually decay into nothing, yet the creation of our brains 13 billion years after the creation of the Universe goes against that law

The Mystique dance, is there more that we can see?

Finally, in this last section of the article Why are we here? we embrace and explore the human brain with a first question of incredible transcendent: could all be a product of our imagination? Could we be right now have our brain in a cube, floating in a liquid, with hundred of sensors attached to a laboratory, that simulates the reality that we believe we live in?

Can you remember your first conscious thought? I do, I guess I might have been 4/5 years old, maybe older. I woke up and look at the light in the window and thought, what am I? what am I doing here? What are these hands, and this body? Before this my first conscious thought I have been living on this planet kind of on auto-pilot, obviously with the support of my parents, but with no clear conscious of what I was doing. My heart does not obey me, neither my lungs or my blood. I believe I have control of my body, or my thoughts but I really can't. Nobody has ever kill themselves by just stopping breathing, nobody can. At that point, I left behind my material life where my parents were feeding me, and entered the awareness of a spiritual one

As you can see, work still on progress...but so far, what I've discover, is that the reason why we are all here can be summaries on one single word: whimsical

The reality is nothing but the projection of the imagination of your brain... right?

Cortical communication via the thalamus http://www.wiringthebrain.com/2010/02/psst-pass-it-on-cortical-communication.html

Secrets of the brain: an introduction to  the Brain Anatomical Structure and Biological Function https://arxiv.org/pdf/1906.03314.pdf

Where are the memories stored in the brain? https://qbi.uq.edu.au/brain-basics/memory/where-are-memories-stored

How our brain makes memories https://www.smithsonianmag.com/science-nature/how-our-brains-make-memories-14466850/

Descartes and the Pineal Gland https://plato.stanford.edu/entries/pineal-gland/

The concept of Brainstem segments http://www.pixelatedbrain.com/Mod_08/section_7.htm