With the Moon in Aries you are likely to have a pronounced need for independence as well as an assertive streak. Aries is a Fire sign, governing impulses, initiative and action. Accordingly, you are likely to feel at your best when you involved with exciting, challenging or new experiences – anything that lets you express your pioneering side. Aries is also a Cardinal sign, highlighting the need to act. You may experience yourself as a dynamic, pioneering individual, and enjoy getting things started – lifting them off the ground. Your need for independence suggests you may be happiest when left to do your own thing, and will detest being told what to do. This is a sign of emotional independence. You are likely to give, and expect, much stimulation, vibrancy and freedom from the people in your life. You may be quick to react, ready to forgive and but also easily hurt. You are likely to enjoy the space to be your own person, and will feel trapped if others try to limit you. You may also be uncomfortable with sentimental displays, or what you may deem as ‘weak’ expressions of emotion. You have an innate warrior-like quality which means you will prefer to deal directly with what is. Social niceties or protocols that mask the truth are usually not your cup of tea. You are likely to call ‘a spade a spade’, and be largely self-sufficient on an emotional level. You have the capacity to endure hardship and negation when it will suit your purposes, and usually expect others to do the same. 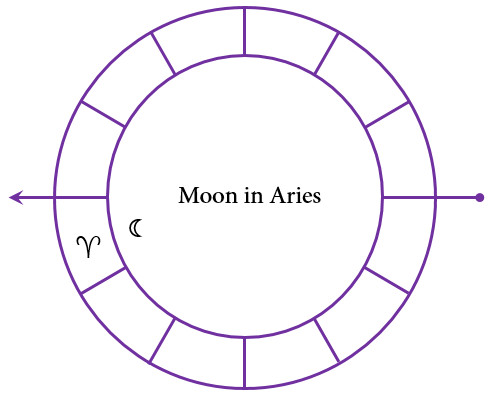 Attributes of the Moon: Great emotionality, highly tuned sensuality, calm, tranquillity, gentle, helpful, affectionate and sweet nature but at the same time unstable, suggestible and capricious with some access to melancholy. It predisposes anxiety and mental problems on the MA of Mercury, Uranus or Neptune. In MA marked inclination to dream and fantasy. Strong passive sensuality, some tendency to abuse food and drink, sometimes attraction to narcotics.

Self-confident and emotionally powerful, independent, unruly, rebellious, childish, restless, impulsive, reckless and even reckless, capricious, changeable, unstable due to thoughtless changes, adventurous spirit. You must cultivate your emotional intelligence to prevent consuming others and leaving them exhausted with your emotions.

Inconstancy in opinions, could lead to criticism or gossip due to excessive talk

Quite accentuated mystical tendencies, you must avoid letting yourself be carried away by a very accelerated imagination that can drag you to companies that are too utopian or beyond your knowledge and possibilities

Very sociable and susceptible to obedience and submission. Appreciated for his modesty, passivity and conciliatory spirit but feared for his unexpected changes. Characterized by its great receptivity to the influences of the environment, for which the selection of its relationships will be fundamental. It will be marked by the education received and must avoid bad company

Predominance of passive mental faculties: inspiration, intuition and sometimes clairvoyance. He knows how to appreciate artistic manifestations, a taste for novelty and change. Little aptitude for mathematics, applied sciences and high mental speculations, but instead attracted to history, geography, literature (especially the novel genre) and poetry, as well as towards the occult where his intuition can serve him well

Assimilation of knowledge facilitated by an excellent memory but often neglected due to own negligence or lack of intellectual curiosity. Great imagination and less development of reasoning, reflection or deduction. In feminine theme it gives rise to a fantasy mind

Weak and changing will, letting things go through negligence or carelessness. All physical effort will be painful and difficult for him, so he focuses on sedentary activities or those that do not require speed or excessive muscular effort. Above all, he must avoid laziness and develop a practical sense. With MA tends to indolence and a very accentuated laziness that compromises success

Despite his capricious nature, he shows quite tenacity when it comes to achieving a goal that he truly cares about. Need to be directed, guided, supported by someone who gives you courage every time you have an unusual initiative ahead of you. It is convenient for him to join others or to act on behalf of someone for specific achievements

You should be wary of excess tofo in the drink even in those that do not contain alcohol. Its influence is mainly based on childhood and youth

Generally harmonious family relationships, with possible self-sacrifice if it comes to being useful to a family member. In terms of masculinity, good disposition towards parents

There is sentimental satisfaction, but in MA tends to shyness and inconstancy in their feelings

Good omen for marital harmony, favorable marriage, early or at least at an acceptable age. It is common for the family to intervene in the preparation or conclusion of the union

Regarding his own home, he prefers to live by the water's edge and feels the desire to form a home, often being very devoted to domestic duties. In feminine matters, she can be an excellent wife and mother of a family. It is possible to have a large number of children. In feminine theme grants fertility

Regarding friendships, in masculine matters you will have the favors of the opposite sex

He frequently finds it difficult to obtain something stable since his work is usually seasonal, alternating periods of action with others of inactivity. In BA major for political career. Activities related to spas, water and liquids in general, marine, dairy. Salesman, agent, hotelier, wet nurse, nurse, poet, novelist, traveler

Attraction to travel, especially long-term cruises and journeys, but the realization of these almost never takes place in reality

Considerable rise, mainly due to his docility and fecundity of imagination, as he assures the favor and sympathy of others although he is generally not alone in his success but is usually supported by a party, group, company, social institution or very powerful people being its position analogous to that of a satellite

Moon in others Signs of the Zodiac

People with this aspect