Mercury in Libra people long for equality in the intellectual world. They view mental affinity as one of the most important themes in any relationship they have. If they are not getting it (and many do not), they should look within themselves for answers. Perhaps they are trying too hard to score intellectual points with their partners instead of truly listening to what they are saying. Mercury in Libra attempts always to be fair in any discussion, but to more personal communicators, Libra’s constant comparisons can, in effect, seem unfair! Libra can go off on so many tangents, and offer excessive disclaimers for any opinion presented, that they end up all over the place. When the planet of speech and the sign of one-on-one relationships get together, our communication with others comes into focus. This isn’t just love relationships we’re talking about -- it’s also about our family, friends, and co-workers, too. If we’ve had any fights, or if we’ve been holding on to a long-term grudge, this is a good time to finally put them to rest. Diplomacy takes center stage when Mercury is in Libra! Libra is represented by the Scales of justice in Astrology, so it makes sense that we’ll be more objective during this time, attempting to approach every situation in a fair-minded and balanced way. Think of this transit as a gentle reminder from the universe on the importance of considering others’ perspectives and embracing the beauty of compromise. 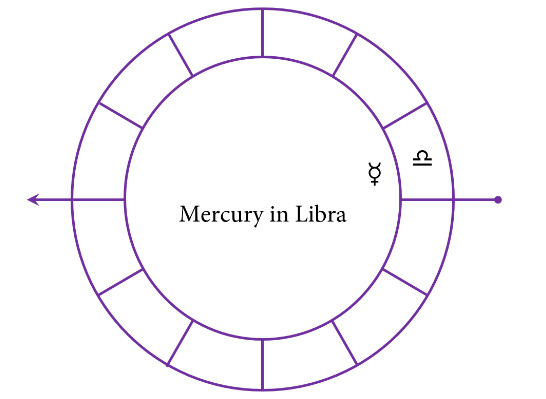 As the politician’s Mercury in Libra Mercury gives the appearance, almost, that they have no personal stake in whatever it is they are talking about and prefer to operate under the assumption of neutrality. Because Mercury rules Libra by triplicity rulership (a type of rulership that depends on the element), this is a placement that is able to work with almost anyone on almost anything. Libra Mercury is very good at making the intelligence of the group stand out. They’re good at asking the right questions to get the conversation and workflow to where the most genius things are likely to happen. The thing that Mercury in Libra people can struggle with is self-exposure. The reason why Libra Mercury is so interested in objectivity is actually that they are hesitant about expressing their personal opinions. This often works in their favour because they are so good at making other people around them feel like geniuses, but they are often not credited with things that they have accomplished. They prefer to contribute to the group rather than accomplish things on their own.

Mercury in Libra natives loves to socialise and are good communicators. Libra is a mutable air sign with Venus as it is the ruling planet. Venus and Mercury have a friendly relationship. Due to the impact of Venus energy, this is a favourable Mercury placement, as it provides the person with outstanding communication abilities and a sophisticated disposition. Mercury is a neutral earthy planet that brings inherent knowledge of numerous art genres when it is located in Libra. Such a person is drawn to artistic and creative endeavours. Mercury is the planet of communication, and Venus’ influence here lends eloquence and refinement to speech. These individuals are soft-spoken and courteous, with the ability to persuade others. These people are known for their extravagant spending habits. They have a strong desire for connections and a soft spot for the opposite sex. Their strategy is well-balanced. Mercury in Libra is associated with an analytical mind and a desire for justice. Such folks are usually tactful and know how to take advantage of situations. These people are known for being gregarious, pleasant, and open-minded. When offered a choice, though, it can be difficult for them to make a decision. These locals have a keen eye for aesthetics and are drawn to opulence, architecture, and stately homes.

Extremely calm and collected, honest, sensitive, good humour, quite nice, tolerant, good sense, delicacy, harmony and elegance permeated in each of his actions. He is usually more concerned with the form than the substance, inherently searching for balance and excessively perfectionist. Perhaps he can be dismissed as superficial or something snobbish, but what really happens is that he hates everything that could be rude, coarse or out of tune. In MA indecision

People with this configuration