During the summer 2013 I spent a few days visiting North West Ireland, an area of the world that I always wanted to explore, just on the top-left corner of the island. It was a brief, introspective but lovely journey the one I took, renting a car and driving through the area on my own. Yes, Ireland, the only country in the world where you speak English as the official language, you pay in euros like in most EU countries and yet you drive on the left, just like in the United Kingdom

On my 2nd day I claimed the Croag Patrick, here are some of pics I took for that day, 7th August 2013

This is a map of more or less the route I took, landing at Knock Airport, then driving to Westport and that was the end of the arrival date

During my second day I ventured downhill, aiming originally to reach Galway but at the end could not get there. I was over-optimistic when considering the state of the roads, 10 miles driving in that part of Ireland took a long longer than expected. Happy though I visited the lakes around Leenaun, stunning beauty!

At the start of the third day I drove alll the way up to Belmullet, the birth town of a good friend of mine. The area was very windy, with almost no trees, but still the landscape was strikingly beautiful. Absolutely everyone I met in there knew London well, and it seems everyone had a relative or had been living for quite a bit in the city. There were many neolithic sites around, and you might argue that the earth must have been warmer around that area when the prehistoric men were living in there, otherwise it would have been a tough job to expect fruits from the trees and animals to be around. So I guess after the Ice Age was finished (10,000 years ago) the area got hot really quickly for the neolithic people to be able to survive in it

The birth of Dracula, Sligo

Last leg of my journey was to visit the city of Sligo, where another good friend of mine from London was born. She is not a vampire (as far as I know) and left that city at an early age. We all know who Bram Stoker is, right? The Irish writer creator of Dracula, but what not many people know is that he was raised in the city of Sligo, by his mum Charlotte. I knew all that as I had read the history highlights of Sligo before actually visiting the city. What I didn't know was that I was going to stumble, walking on the street, with this burnt abbey (notice it was an "abbey", not a church, just like the abbey used in Dracula's book). The abbey was destroyed by a fire in the times of Bram Stoker's mum, and it was said to be enchanted by ghosts and other spirits. OMG!

This is a picture of the Abbey, destroyed by a fire? How come the tower remains intact? What actually really happened there? I can easily imagine young Bram Stoker walking near by the Abbey, holding the hand of his mum, while she was telling him not to get close to that building, that is enchanted by evil spirits. That will have ignited the imagination of the young writer so much, and certainly will have contributed as a source of inspiration for his writings! You are looking below at the building that is the origins of Dracula and all the universe of vampires that follow after the publication of the book, back in 1897. Every single movie of vampires and blood hunters that you know... can be traced back to this building. Terrific Ireland! 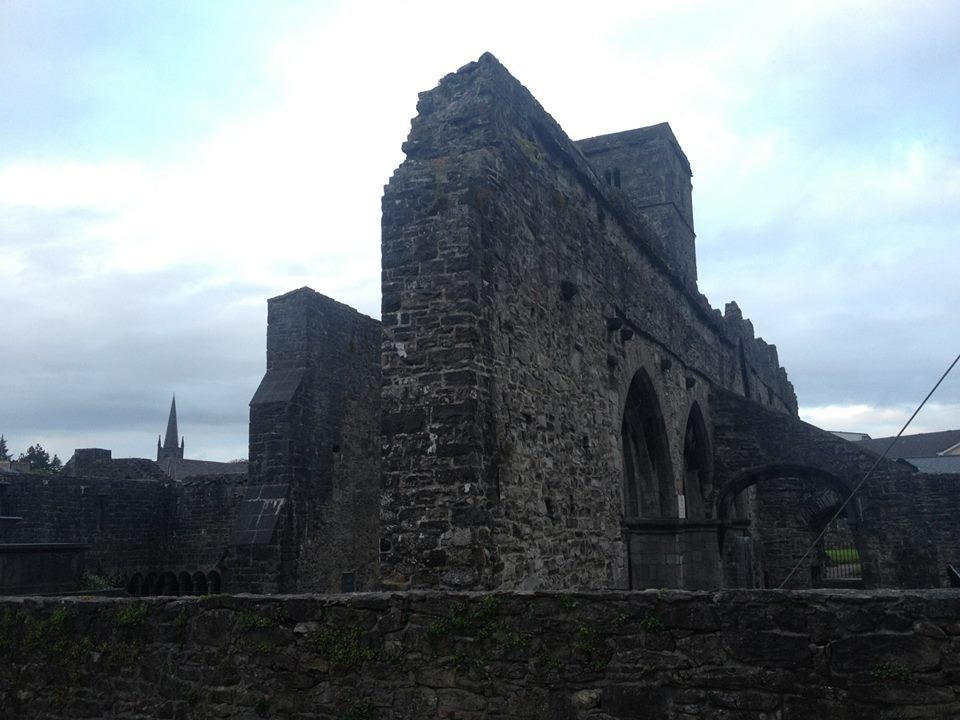 I thought about all of this on the spot, 2013, and my theory of connecting this building as Dracula's source of inspiration has been corroborated by other references that I found later, linking a Cathedral and an epidemic of Cholera to his writings, but I believe the heart of Dracula was forged in this burnt Abbey

Apart from that, the best part of my journey was without any doubt the time spent in Sligo, was extremely lucky to come across a festival that happened the very same night I was staying in the city, and met quite a few friendly people to drink and party with. Love Sligo!

If you have the opportunity to visit this city, do it! I highly recommend it