Jerusalem and the history of God

It was the year 2013, October, when a teacher at the school where I used to work told me that they were planning a trip to Jerusalem, for a week. The 2013 was a very challenging and life changing year for me, taking during its course many of the decisions that have deeply marked the second part of  my existence. The preparation for this journey was probably one of them. I did enjoy visiting Israel and Palestine, at the end I was there a week during the half-term of February 2014, with a group of 12 other people, all catholic. I was the only one who visited the Dome of the Rock

The picture below is me. At the back, the Dome of the Rock where inside there is the bedrock that supported the Jewish Temple destroyed by the Romans in 70 ad, below me, under my feet, the Holy of Holies, the cave where Jews pray just like on the Western Wall. Around me the area where Jesus must have walked in and out of the Temple since his childhood, when visiting Jerusalem for Passover and such. Above me....just peaceful blue sky 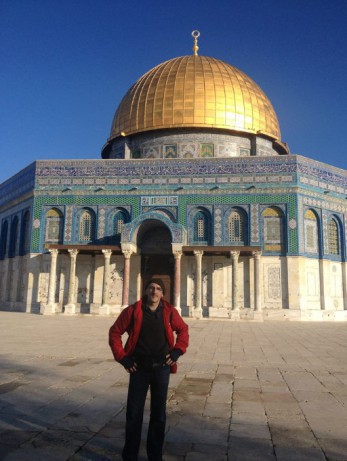 Jerusalem ;needless to say,it is a city full of History. I read the book "Jerusalem: The Biography"  by Simon Sebag Montefiore (https://en.wikipedia.org/wiki/Jerusalem:_The_Biography), a superb reading that without any doubt allow me to enjoy the city visit more and appreciate what I was seeing. Having said that, I did not like Jerusalem, not the historic center that I saw. All the houses, all the roads, all the ceilings were made of stone, wood was nowhere to be found. I saw people of all different sort of religions without love from one another, all the streets that I saw had been splashed with innocent blood in the past. Yes, Jerusalem is not a glorious city, it is the city that Jesus chose to die

Bethlehem ;we spent one day in visiting the city. Early morning we left the Hotel in Jerusalem and packed a mini-bus full of other local people that were going to Palestine too, for work I suppose. Entering Palestine was no problem at all, the drive was smooth and on the check point between the countries we just passed right through. We spent the day in Bethlehem, in the Church of the Nativity and its surroundings. The entrance to the Church is very narrow, and you have to literally bend yourself over to enter. They did that on purpose, to prevent horses from coming into the Church and in a way preserving it to our days and prevent spoil when in times of war and/or invasion.

I saw the Israeli West Bank Barrier, disgraceful construction really. The concrete as symbol of the selfish human beings. Funny to think that towards God there are crying on a wall, while towards their country men the build a divisive wall. On our way back to Jerusalem, our mini-bus was stopped by Israeli Police and two younger girls, in their early twenties, came inside our mini-bus. They were pretty hot, and their uniform was tight. Being so young, they had a lovely figure, and they wore cute sunglasses and each one of them have their Uzi pistol kind of loose of their holster. They hand-picked a few of the Palestinian that were travelling with us in the mini-bus, all of them of the very same age as them, and took them out for a 20' chat. It happens once of the Palestinian that was taken out was sitting next to me. When he finally came back I asked him, and with a broken voice he told me: "Every day, every day like this", stopped for 20' on this way to work by pretty young Israeli soldiers

I tend to read the Gospels every now and then, particularly San Juan which I found the most interesting and engage on its reading usually during the "Cuaresma", the 40 days before Good Friday. I truly enjoy their reading and recommend to everyone whether they are religions or not. Here are some notes that I'd like to mention of each of the gospels

Reading of the holy gospel according to Saint Matthew (Mateo)

This gospel is by far the longest and most comprehensive, used a lot by the church on its readings. The World of dreams and supernatural is very present on this gospel. He puts emphasis on the prophesies (particularly Isaias) that have been fulfilled by the arrival of Jesus, thus giving him authority as the Messiah and the right inheritance of the Pentateuch and other books in the Bible (Vulgata version). The killing of the "Santos Inocentes" is only mentioned on this gospel, again, to fulfill the prediction of an ancient prophecy

God speaks in dreams to Joseph in a few occasions, to tell him not to reject his wife (C1, v20) and to advise him to leave Israel (C2, v13) and then later on come back to Egypt after Herodes' death (C2, v22). The Wise Man (Reyes Magos) are also warn in dreams by God (C2, v13) not to come back to Herodes and tell him where to find Christ.

Reading of the holy gospel according to Saint Mark (Marcos)

This gospel starts right after the baptism of Jesus by Juan the Baptist, and at the beginning shows a Jesus that is upset with the Fariseos and Saduceos for they follow the Law to the word and keep the Sabbath at all costs

Reading of the holy gospel according to Saint Luke (Lucas)

This gospel is the only one that mentions the birth of Juan the Baptist, and how the angel Gabriel shows up to his father Zacarias to tell him that he's gonna be a daddy. It is the only place too, where an angel appears to the shepherds asking them to adore baby Jesus that has just been born. Also Simeon, the elderly man who was told by the Holy Spirit that he'll not died without seeing the Messiah, is only mentioned by Saint Luke. When Jesus is 12 years old he left his parents and go to the Temple to starts his mission, but then he realised he has a family to look after, so he'll work and postpone his mission until he's 33 years old (pretty much a very mature man by the 1st century standards) and all family matter has been sorted

Reading of the holy gospel according to John (Juan)

Parable of the Mustard Seed https://en.wikipedia.org/wiki/Parable_of_the_Mustard_Seed